Convert MXF video to MOV, AVI, MP4 or any other formats and editing programs like FCP X, iMovie, Avid MC on Mac OS.

MXF Converter for Mac can also help you to convert MXF to playable devices, such as HDTV, Android tablets, Android smartphones, Windows tablets, iPhone 6/5S/5C, iPad, Apple TV, etc. video and audio quality are guaranteed, you can even get MXF video converted with quality lossless. What’s more, you can convert MXF video and maintain the original multiple audio tracks.

Optimized Formats for Editing Software
After you recorded MXF files with camcorders, you may need to edit videos in editing software, MXF Converter for Mac has native codecs output for popular video editing programs on Mac, such as Apple ProRes 422/4444 codec, Avid DNxHD codec, Apple InterMediate Codec, DVCPRO and XDCAM, etc. with the help of MXF Converter for Mac you can import videos to these programs for editing natively.

Powerful Video Editing Feature
MXF Converter for Mac offers powerful video editing feature, you can edit MXF video before convert. You are able to adjust the video effect like saturation, contrast, brightness, hue and volume, or trim MXF video to get the part you need, and crop function will help you to remove the black bars from MXF recordings, you can also use it to change the aspect ratio. Besides, you can add 3D effect to MXF video, or add watermark to the video, and you can replace/remove audio from MXF video files.

Multiple Audio Tracks Support
Acrok MXF Converter for Mac has added support for multiple audio tracks, which can maintain the original audio tracks when you convert MXF video to Multi-track MKV, MOV or MP4. Besides this, you can choose any audio tracks you need to convert, this feature may help you when you don’t want all the audio tracks.

It is available to customize the output parameters according to your need, just click Settings button and then you can adjust the resolution, bitrate, frame rate, codec, or audio parameters.

You can use MXF Converter for Mac as MXF video player on your Mac, in the Preview window, you can play your MXF video, and you can play the video with full screen, so it is also a MXF player for you. 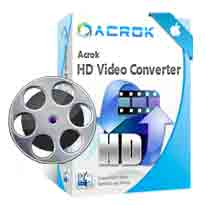